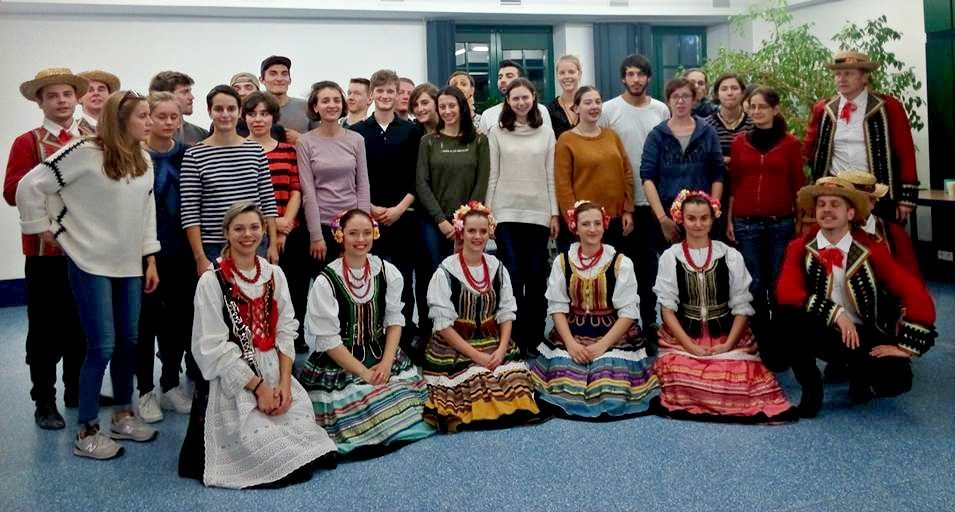 After 10 days in Cracow, a period wherein my new apartment started to feel like my own place and my new colleagues’ faces became more and more familiar, it was time to exchange these novel familiarities with, again, something new. A new city and 25 new faces: it was time for the On-Arrival training for EVS-volunteers in Warsaw.

For 6 days 25 volunteers from different Polish cities (but mostly from Cracow) and two experienced trainers were staying in hostel Agricola in Warsaw. During these 6 days we would discuss several topics that would be useful for recently new arrived volunteers. In the beginning I was skeptic about the length of the training. Would it really be necessary to talk 6 full days about what to expect and what to do (and what not)? The answer to this question turned out to be positive.

The main aims of the training were to introduce the volunteers to each other, to Poland, and to give the volunteers tools and knowledge what to do during their projects. Because even though the volunteers work in different cities or villages, with different target groups and with different possibilities, there are some overlapping areas between our projects for which the trainers provided us (the volunteers) with inspiration.
The first objective of the course was to introduce us to each other. We did several games to learn each other’s names, nationality and EVS project. In general it was very easy to establish new connections because we have a lot in common. All of us recently moved away from our trusted environment in order to face new adventures and new friends in Poland. Everybody was very open and friendly: new friends were made instantly.

The second aim of this training week was to introduce us to Poland. The Polish cuisine was made familiar to us by the catering service of the hostel. Every lunch and dinner were prepared according to Polish tradition. Or at least, salad with banana? Is that common in Poland, or did the cook need to get rid of his overload of bananas? I also learnt that in Poland (or at least at Agricola) saying “I am a vegetarian” means “I don’t eat meat but I can eat fish”. Fortunately, the fish was properly hidden in the dish so the vegetarians only found out afterwards. So no one went to bed starving 🙂 We also got familiar with traditional Polish music and dances. We even tried some of them ourselves.

The trainers came up with an inventive and informal way of teaching us about the Polish culture: we had to find the information ourselves and only about topics of our own interests. Groups of volunteers could pick their own topics. E.g. Polish traditions (I learnt that seniors enjoy weddings the most because youngsters become too drunk these events..?), Polish music (I can only remember The Dumplings because the other musicians had complicated Polish names), Polish Do’s and Don’ts (always let old people go first, especially old ladies. Except in restaurants (note to Polish people: Why is this?)), and hobbies of Polish youngsters (reading turned out to be more popular than partying and doing sports… yeah sure! 😉 ). My topic was Polish politics. Together with a German guy and Spanish girl we went to a shopping mall to interview people. It turned out that people had very different ideas about the topics we asked their opinions on. Some people like the current government for their housing projects for the middle class, some people don’t like them for their ideas about abortion. Some people didn’t know much about politics and just say they agreed or disagreed with Duda without knowing for what reasons. The people who were more into politics had different ideas but shared the same feeling: the feeling of fear. Fear for the polarization between supporters and opponents of the current government, fear for a war with Russia, fear for the deteriorating relationship with the European Union. This event taught me more about Polish politics than any trainer could have during a formal presentation.

Finally, the trainers taught us about games we can do with children, activities we can organize for seniors, and how to write project proposals. Also the informal part of the week was informative:

This site uses Akismet to reduce spam. Learn how your comment data is processed.